Colourful characters adorn our family tree!  - the chapters for the family history story for our grandchildren On my Dad's side, Cec...


I woke suddenly to see Cec falling between chair and the bed and wardrobe. I rushed over to help him up. I tried and tried, held his left hand, couldn't raise him. I let my frame to hang on to, hobbled into the lounge where I had left a crutch, went to the front door and called and called. It was 7.30 am - rushed back to Cec but he had slipped further down, still holding my frame, so went back to call Jessie. No answer, so I found the Police No. He said it will take five minutes to get to me and I watched the clock on kitchen wall. He got to me in just 5 minutes went into bedroom. He came back and said "he is gone".


This poignant diary note, just popped up in a diary long lost, written by my mother in 1986. This and many other family diaries are now stored in the 'Memory Box'.

Memories of that day my father died, reminded me that I had written a story of the events from my perspective. I need to 'dig that out of the archives'.

However, today I want to focus on a love story to commemorate my parents (Cecil and Winifred), now both long gone. This is the story I love to share with my grandchildren - it is my imagined scenes for the day my parents eloped - made up of the details shared by my mum. 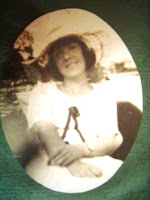 The Knight in Shining Armour

Win watches the clock on the office wall as the minutes tick by towards 12 noon. She bites her bottom lip and forces herself to finish the task – all those figures – she was good at adding up. Sales had gone well this week, Dad would be really pleased. Pity he wasn’t so pleased about Cec – he had flatly refused when Cecil Henry had asked for Win’s hand in marriage.

No assets of any consequence, no prospects and no money – not what he wanted for his eldest daughter.

Win had shed many tears that evening when her father told her his decision. Even though she was 21 and Cec was already 24, it wasn’t fair. "Too much emphasis on ‘the haves’ in my family", she thought. She wanted to marry for love. It wasn’t until the next day when Cec had told her about his secret plans that she began to brighten up.

On this Wednesday, her half day at work, she is wearing a bright floral frock, borrowed from her close friend Nancy, and she even has on new shoes and new nylon stockings. She looks down and stretches her neck to see that the seams of her nylons are still straight. She looks again at the clock and let’s out a small gasp of delight – it’s now 12 and she can meet Cec as arranged. Quickly she shuffles the ledgers, pens and pencils back into the desk drawer; and tidies the piles of receipts and invoices into their respective boxes.

On her feet in a swish of silk on leather, she crosses the wooden floor trying not to click, clack too loudly and disturb the other accounts workers. Win takes the new hat from the rack – it was worth the whole of last week’s wages – and carefully pins it securely to her red-gold hair.

The strident sound of the bicycle horn from the High street makes her look away from the mirror to the window – quickly scanning the street for her ‘knight in shining armour’. 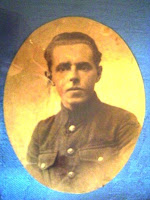 There he was, dressed in his new RAF uniform, complete with driving helmet, goggles and gloves, standing beside his pride and joy, his only asset – the 1900 Harley twin cam with polished black sidecar and canopy.

Win rushes from the office, slamming the glass door with a clang and runs to the bike and her man. A swift embrace and kiss on his cheek, Win looks up and down the street and smiles shyly at Cec before climbing into the sidecar.

"All ready?" he asks, starting the motor at the same time. "How much time have we got", she says in reply, looking at her watch now. "Don’t worry" he says, "we’ve plenty of time to reach the registry office and before you know it we’ll be wed".

Win smiles widely at this and holds on tight to the sidecar as they roar off down the High street towards road and the registry office.

"What will Dad say about this?" she muses. "Doesn’t matter now" she thinks, "...the plan is made, and I’m going to start my life with Cecil Henry and be Mrs Winifred Edith Allery".

Note: if you'd like to read the story of the Angell Inheritance please read that one here;
https://coachcaroleblog.wordpress.com/2016/02/04/the-angell-inheritance/

Please leave your reflections of my posts here in the spirit of sharing family history.

This blog is listed with